CiCi Blumstein is an artist and frog collaborator. She works across installation, performance, writing, moving image and artist film. Born in Germany, she has been based in the UK since 1989. Her work seeks to instigate a re-coding of urban and wild space through direct interaction and construction, creating new, often startling experiences and connections between people and their environment, and with each other. CiCi develops her long-term projects from diverse sources and interests, such as biodiversity & habitat research, ecology, architecture, design and engineering, object theatre & contemporary puppetry, visual, sound and movement arts. She utilises urban planning and regeneration as art intervention, realizing human spatial dreams whilst raising awareness about wildlife conservation. She is currently writing an Amphibian Thriller.

CiCi’s work has been commissioned for many different settings, from large-scale sculptural installations in the Turbine Hall at Tate Modern, to performances, workshops and screenings in village halls and town squares, in derelict factories and on urban waste ground, as well as for schools, libraries and universities. For a selection of clients, commissioners, venues and organisations CiCi has worked with, see here.

From 2013 to 2015, she was the artist-innovator in residence at Wired Sussex / The FuseBox in New England House, where she co-designed and developed FuseBox24 – a radical business support program for innovators and creative start-ups – in collaboration with Jim Byford. See full research report on the FuseBox24 project here. The next FB24 program is planned to start in Spring 2016.

CiCi loves frogs and is the founder of The Lucky Frog Log, where she collaborates with amphibians and organisations internationally to develop long-term art projects, designing city and business spaces as living bio habitats, creating urban backyard ponds, and establishing creative innovation and art fusion culture in technology and business contexts. Her ongoing project Croaking Drain, Hidden Frog was featured in the Brighton Digital Festival throughout September 2013 [Space Encoders: When Frogs Go Digital], 2014 [Croaking Drain, Hidden Frog] and 2015 [Croaking Drain, Hidden Frog: The Frog Forensics Lab]. As artist in residence and active committee member of the Sussex Amphibian & Reptile Group (SxARG) since 2013, she has set up and maintains the group’s Social Media, as well as creating art works, performances, workshops, talks and new Science Communication strategies – such as her performative TED talk – in support of amphibian conservation.

“Once danced, a space cannot be un-danced – it remains in the imagination and in the body as a space of infinite possibilities. My work seeks out and vibrates in these unknown spaces between body & film, science & performance, architecture & theatre, transforming the physical and personal into a form that others can experience directly.” 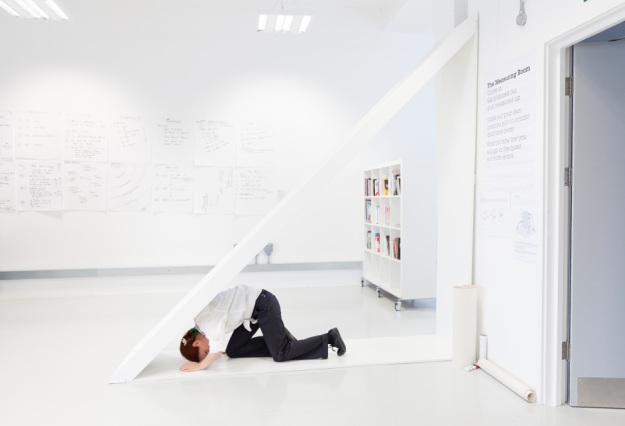 CiCi Blumstein working in her Measuring Room Installation at The FuseBox Brighton 2013. Portrait by Ollie Gapper.