‘Petal in the Pond’ – Photo by CiCi Blumstein 2015. Cool Calm by the Frog. This is ‘Petal’, a Common Frog (Rana temporaria) and one of the regular Brighton Backyard Frogs, chilling out in my micro wildlife pond on a hot day in June 2015.

“It’s a cold afternoon in December 2012, just before the frost sets in. I open the backyard door and shake out a dusty rug, blinking into the white winter sunlight. At the edge of my vision, I catch an extra sparkle, watery and rhythmic – waves in a deep bucket.

Skinny and golden, a small jewel set in dark blue plastic. I scoop the frog up and out of the icy water, its smooth, delicate body so light, I’m not sure it’s really there, nestling in my hand, exhausted yet fiercely alive. As if under a spell, I turn from the barren winter yard and step through the door with my treasure, knowing exactly what to do next. I’ve never looked back …”
[Extract from Space Encoders: When Frogs Go Digital, a guest blog post by CiCi Blumstein, August 2013]

At the beginning of December 2012, just before a bitter cold snap, a small and exhausted common frog [Rana temporaria] hopped into my life. He was a lucky frog indeed: I found him caught in a deep bucket that had half-filled with rainwater in the garden – skinny, struggling and unable to escape. Just a few hours later, and it would have been a choice between drowned or frozen frog, probably both. A recent, rather radical garden clearance, plus building works nearby must have disturbed and left him without a suitable shelter to hibernate. I decided to help him over the winter months by creating a temporary indoor habitat.

The frog was soon thriving again and in Spring 2013, after several months of research, I started work on developing an amphibian-friendly habitat and micro wildlife pond for him in my backyard. By Summer 2014, this was well established, now supporting a happy frog population of about 20+ individuals. It has since been inspiring numerous art projects, events, talks and workshops – The Lucky Frog Log will trace this ongoing process and our unexpected inter-species art collaboration…

Follow the Frog!
The best way to catch up with the latest goings-on is via the Lucky Frog’s Twitter croaks at @LuckyFrogLog / #Croakorus / #AgentAmphibian, and see also our posts right here on the Cytomotion blog. Scroll down for the Lucky Frog’s gallery and occasional project updates below.

The Lucky Frog now also has his own Facebook page, where we share our latest project updates & photos, plus amphibian news & views, events, latest art, conservation & research croaks from around the world, regular features such as High Four, Amphibians! [good news for Amphibians] and more…

Gallery – we will add more photos as the project develops, please check back again soon

Update September 2015:
We are featured in the Brighton Digital Festival for the third year running, this time with Croaking Drain, Hidden Frog An Amphibian Thriller: The Frog Forensics Lab – check it out here! 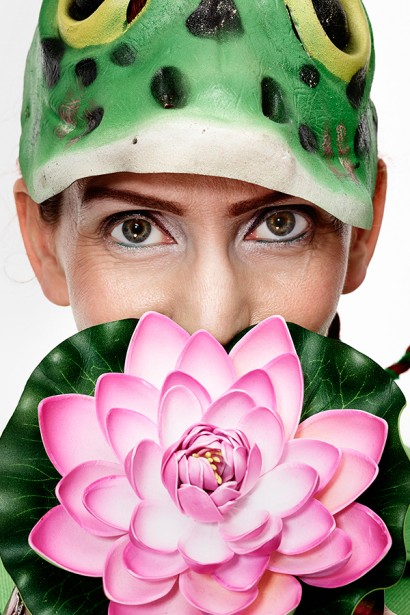 ‘Out in the field’ – CiCi Blumstein aka Agent Amphibian. Portrait by Dean Chalkley 2014.

Update September 2013:
All is going well here at The Lucky Frog Log, with lots of exciting developments and plans afoot. We have a super busy month ahead with our Space Encoders: When Frogs Go Digital project in residence at the Brighton Digital Festival. See our BDF 2013 events page here and find out what else we were up to over the summer here. Since May 2013, we’ve also built a mini wildlife pond in the backyard and had at least eight more frogs plus three juvenile newts move in – but more on that and other news once we catch our breath …

With happy croakings from ‘Big Inch’, our latest backyard lodger, spotted in August 2013 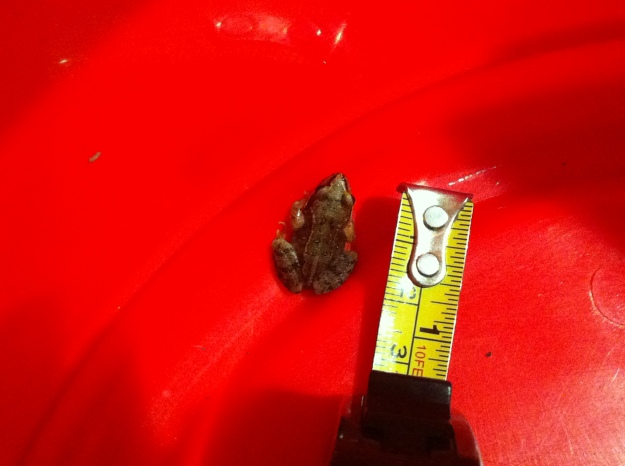